One Nation Under Surveillance 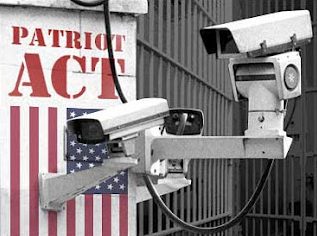 Obviously, the freedom of speech is a crucial element of freedom, so much so that it is enshrined in the First Amendment of the Bill of Rights. And the truth is, freedom of speech is not at all what it used to be in this country. If you doubt that, just ask the hundreds and thousands of journalists, news anchors, sportscasters, business executives, religious leaders, non-profit organization heads, teachers, scientists, government employees, etc., who have lost their positions for saying something politically incorrect. If you could, ask the late Howard Cosell or the late Jimmy “The Greek” Snyder. Ask Judge Andrew Napolitano, Glenn Beck, or Lou Dobbs. There are literally millions of people across America who daily “bite their tongues” and refuse to speak for fear of demotion, dismissal, retaliation, persecution, or worse! You call that freedom of speech?
Gag!

Another critical element of freedom enshrined in the First Amendment is the right to worship freely. But, this, too, is not what it used to be. Can anyone remember when pastors and church leaders were free to say what they wanted in regard to issues that tread into government? If you do, you are probably over 50 years old or attend a non-501c3 church. On the whole, pastors and church leaders today are literally “scared silly” to broach any topic that might have political overtones, which means a sizeable percentage of the Bible is either ignored or spiritualized away by the vast majority of America’s pulpits. You call this freedom of worship?

Of course, the right of the people to keep and bear arms is one of the most crucial ingredients of a free society. It is this right that, for the most part, separates the United States from the oppressed nations of the world. And, of course, the Powers That Be have been chipping away at this fundamental tenet of liberty for nearly half a century, to the point that there are literally tens of millions of Americans who are forbidden by law from owning or possessing a firearm due to a conviction or plea bargain for some “crime” in which no one—nada--was injured. And in many states, even those who have never run afoul of the law are forbidden from owning--and especially--possessing a firearm. Can anyone say Massachusetts or California?

Government attacks against the Second Amendment notwithstanding, I am absolutely convinced that the ownership and possession of more than 100 million firearms in the hands and homes (and hearts) of the American citizenry is the main thing that has kept the overt forces of tyranny somewhat at bay to this point in our country. I suggest that even you folks who do not really care anything about guns and shooting, but who claim to love liberty, go purchase a firearm and learn the fundamental elements of firearm safety and usage--if for no other reason than because you are an American who believes in freedom and who understands that only free men own guns!

The right to be secure in your homes, papers, effects, etc., is also an essential element of liberty. But this right has been largely expunged in the United States--especially since 9/11/01. The NDAA (and other federal laws and executive orders) suspends the right to a trial by jury and the right to not be subjected to cruel and unusual punishment, among other essential liberties.

This is an issue that cuts across all political, social, racial, and religious lines. It doesn’t matter to a hill of beans whether one is liberal or conservative, Democrat or Republican, white or black, or Protestant or Catholic. The right of free men to be left alone without government sticking its nose into our personal and private business is the quintessential ingredient of a free society. And in this regard, do you really believe America is still the “land of the free”?

America is no longer “one nation under God.” Today, America is “one nation under surveillance.” Cameras monitoring our every movement, satellites taking pictures of our homes, listening devices being used to record our conversations, hi-tech computers capturing virtually every piece of correspondence, banking institutions forwarding our private financial records to Big Brother, and now armed drones flying over the neighborhoods of the American citizenry all reveal that America is anything but the “land of the free.”

The following My Way News report is merely another example of this repulsive reality:

“The U.S. intelligence community will now be able to store information about Americans with no ties to terrorism for up to five years under new Obama administration guidelines.

“Until now, the National Counterterrorism Center had to immediately destroy information about Americans that was already stored in other government databases when there were no clear ties to terrorism.

“Giving the NCTC expanded record-retention authority had been called for by members of Congress who said the intelligence community did not connect strands of intelligence held by multiple agencies leading up to the failed bombing attempt on a Detroit-bound airliner on Christmas 2009.

“‘Following the failed terrorist attack in December 2009, representatives of the counterterrorism community concluded it is vital for NCTC to be provided with a variety of datasets from various agencies that contain terrorism information,’ Director of National Intelligence James Clapper said in a statement late Thursday. ‘The ability to search against these datasets for up to five years on a continuing basis as these updated guidelines permit will enable NCTC to accomplish its mission more practically and effectively.’

“The new rules replace guidelines issued in 2008 and have privacy advocates concerned about the potential for data-mining information on innocent Americans.

“‘It is a vast expansion of the government's surveillance authority,’ Marc Rotenberg, executive director of the Electronic Privacy Information Center, said of the five-year retention period.

“The government put in strong safeguards at the NCTC for the data that would be collected on U.S. citizens for intelligence purposes, Rotenberg said. These new guidelines undercut the Federal Privacy Act, he said.

“‘The fact that this data can be retained for five years on U.S. citizens for whom there's no evidence of criminal conduct is very disturbing,’ Rotenberg said.”


Go to any oppressed country, and what will you find? A surveillance society! This is the most glaring characteristic of an Orwellian state. And ladies and gentlemen, Communist China or Red Russia has nothing over the United States when it comes to the development and implementation of a surveillance society. And the truth is the US would have already plummeted into overt oppression if it were not for the fact that there are so many guns in the possession of the American citizenry. But, I say again, without the right to be left alone, liberty does not exist.

Folks, we must start paying attention to this surveillance society that it quickly taking shape in this country. No! Not just start paying attention to it, start RESISTING it! A surveillance society cannot emerge without the cooperation of State governors, attorney generals, legislators, senators, county sheriffs, city mayors, police chiefs, etc. And where are America’s pastors to sound the alarm bells from the church houses regarding this attack against our liberty? Where are the college professors? Where are the journalists and reporters? Where are the retired military personnel who were willing to sacrifice their lives on foreign shores? What good is it to fight for freedom overseas, if we are not willing to fight for freedom at home?

So, the next time you hear someone shout out that America is the “land of the free,” ask them if they have given any thought to the fact that virtually everything they do, everything they say, everywhere they go, and every financial transaction they make is being monitored, scrutinized, and surveilled by the federal government and the private institutions they control. Ask them what they are doing to resist this sinister surveillance society that is quickly enveloping this country. Ask them what their pastor is doing to resist this burgeoning surveillance society. Ask them what kind of country do they think their children and grandchildren are going to grow up in one day. Then ask them if they truly understand what it means to be free. And maybe more importantly, ask them if they understand what it takes to keep America free, because people who are not left alone are not free!

*If you appreciate this column and want to help me distribute these editorial opinions to an ever-growing audience, donations may now be made by credit card, check, or Money Order. Use this link:

And please visit my web site for past columns and much more at: http://chuckbaldwinlive.com


NOTE TO THE READER:

Chuck Baldwin is a syndicated columnist, radio broadcaster, author, and pastor dedicated to preserving the historic principles upon which America was founded. He was the 2008 Presidential candidate for the Constitution Party. He and his wife, Connie, have 3 children and 8 grandchildren. See Chuck's complete bio at: http://chuckbaldwinlive.com/home/?page_id=6

This email editorial cannot be considered Spam as long as the sender includes contact information and a method of removal.

To subscribe, click on this link and follow the instructions: http://chuckbaldwinlive.com/home/?page_id=450
Chuck Baldwin's commentaries are copyrighted and may be republished, reposted, or emailed providing the person or organization doing so does not charge for subscriptions or advertising and that the column is copied intact and that full credit is given and that Chuck's web site address is included.

Editors or Publishers of publications charging for subscriptions or advertising who want to run these columns must contact Chuck Baldwin for permission. Radio or television Talk Show Hosts interested in scheduling an interview with Chuck should contact sec@chuckbaldwinlive.com

Readers may also respond to this column via snail mail. The postal address is P.O. Box 10, Kila, MT 59920. When responding, please include your name, city and state. And, unless otherwise requested, all respondents will be added to the Chuck Wagon address list.