She went to Harvard Law School.  That's where she learned to become a world-class liar.

She claims to be a single-mother living in a trailer home--e.g., "trailer trash", yet she is a Harvard lawyer now running for Texas Governor.

Obama went to Harvard also, and he's been caught in numerous lies.

So did many of your US Senate & House Democrats.

This seems to be a pattern coming out of Harvard Law School.

So, which is it?  Poor single-mom "trailer trash", or Harvard educated lawyer?

This is yet another claim of false allegations to portray herself as "victim".


Wendy Davis: I need to focus more on lying better

You're the one who brought it up.

Now that she’s running for governor of Texas, Wendy Davis’ story is finally being vetted, and according to the Dallas Morning News, there are some, uh, inaccuracies:

In the shorthand version that has developed, some facts have been blurred.

Davis was 21, not 19, when she was divorced. She lived only a few months in the family mobile home while separated from her husband before moving into an apartment with her daughter.

A single mother working two jobs, she met Jeff Davis, a lawyer 13 years older than her, married him and had a second daughter. He paid for her last two years at Texas Christian University and her time at Harvard Law School, and kept their two daughters while she was in Boston. When they divorced in 2005, he was granted parental custody, and the girls stayed with him. Wendy Davis was directed to pay child support.

Nothing like embellishment to make a story sound good.  The basic facts were there, but didn’t tell the whole story.

Well, aside from the not quite true narrative of the “single, divorced mom living in a trailer” the bit in there that frosts some of us girls is the husband paying for the wife’s law school, and she divorces him.  Sounds a lot like gold-digging.

“One day at the end of a meeting, Jerry asked, ‘How do you like younger women? My daughter wants to go out with you,’” Jeff Davis said in an interview. “I was flattered so I took her out. We dated two or three years, then got married.”

While they dated, Wendy Davis enrolled at Texas Christian University on an academic scholarship and a Pell Grant. After they married, when she was 24, they moved into a historic home in the Mistletoe Heights neighborhood of Fort Worth.

Jeff Davis paid for her final two years at TCU. “It was community resources. We paid for it together,” Wendy Davis said.

When she was accepted to Harvard Law School, Jeff Davis cashed in his 401(k) account and eventually took out a loan to pay for her final year there.

“I was making really good money then, well over six figures,” he said. “But when you’ve got someone at Harvard, you’ve got bills to pay, you’ve got two small kids. The economy itself was marginal. You do what you have to do, no big deal.”

The daughters, then 8 and 2, remained with Jeff Davis in Fort Worth while Wendy Davis was at Harvard.

Left that part out, Wendy.  Working nights while going to school and raising a daughter is impressive.  Calling your husband’s money “community” and leaving him after he went into debt to put you through law school is plain and simply not right.

Over time, the Davises’ marriage was strained. In November 2003, Wendy Davis moved out.

Jeff Davis said that was right around the time the final payment on their Harvard Law School loan was due. “It was ironic,” he said. “I made the last payment, and it was the next day she left.”


Wendy Davis said that as a lawyer, she contributed too.

“I was a vibrant part of contributing to our family finances from the time I graduated to the time we separated in 2003,” she said. “The idea that suddenly there was this instantaneous departure after Jeff had partnered so beautifully with me in putting me through school is just absurd.”

Doesn’t matter.  It really does look bad.  Newt Gingrich caught hell for divorcing a wife who was going through cancer treatments.  Why should a woman who leaves her husband after he pays for Harvard get a pass?

In his initial divorce filing, Jeff Davis said the marriage had failed, citing adultery on her part and conflicts that the couple could not overcome. The final court decree makes no mention of infidelity, granting the divorce solely “on the ground of insupportability.”

“She did the right thing,” he said. “She said, ‘I think you’re right; you’ll make a good, nurturing father. While I’ve been a good mother, it’s not a good time for me right now.’”

And after she used him, cheated on him, and put being a politician ahead of her partnership with him, her ex defends her.  In Texas, no less.  Dude, man up.

With all these details surfacing, the story of “poor trailer park trash rising from a broken life to be governor” really is not going to work.  Wendy Davis is a woman who uses people for her own gain. Breitbart says it raises questions of integrity.  Yes, but more so, the real story of Wendy Davis paints a picture of user.  Brains and ambition aside, that is not the sort of person good women are raised to be.

Abortion stance aside, honorable women will not stand with Wendy.  She gives the rest of us a bad name.
URL: http://wp.me/p1bb2w-few

And thanks to the  Earl of Taint for the picture 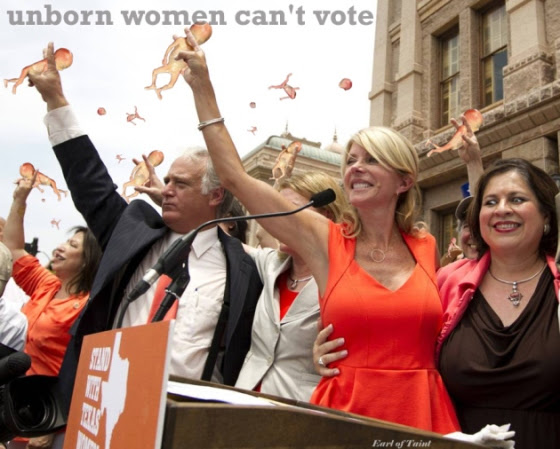 Posted by Leonard Henderson at 11:14 AM