A paragraph caught my eye in this article-

....By the way, the single most interesting number in the whole race was 28,785. That is how many dues-paying members of the American Federation of State, County and Municipal Employees were left in Wisconsin after Mr. Walker allowed them to choose whether union dues would be taken from their paychecks each week. Before that, AFSCME had 62,218 dues-paying members in Wisconsin. There is a degree to which public union involvement is, simply, coerced. See the rest of the story HERE if you are interested. 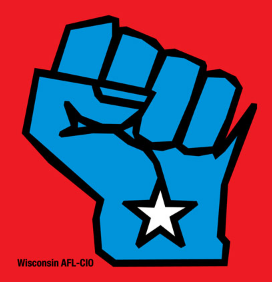 The reason this caught my eye is, CPS agents almost universally belong to either AFSCME or SEIU.  Which makes a lot of sense when you know how Communist and brutally tyrannical CPS people are.

Here's The Story Behind the Blue Fist

And HERE is the story about the symbolism of FISTS.
Posted by Leonard Henderson at 8:10 AM